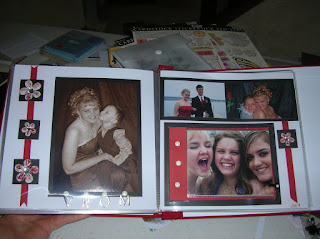 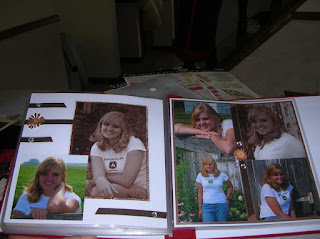 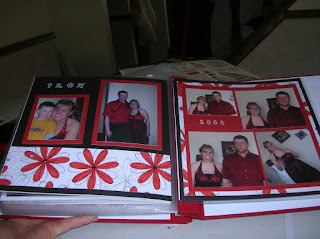 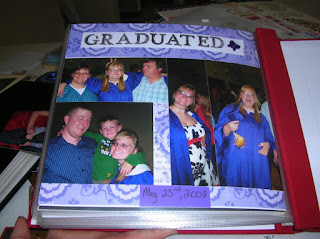 Well here are the last 7 pages for kris's grad book. I finished the book at 3:58 on July 4th the party started at 4pm. I made it, hehe. So the first one I used cranberry , black and daisy white. I made a little flipbook on the second page as she had tons of prom pics. inked white daisies with cranberry and embellished with gem and bigger brads, as well as cran ribbon. All CTMH.
The second set is the senior pics I took with white and chocolate paper. Simple with just some ribbon and a few embellies.
The third is the same colors as the first. I did the random stamped paper and colored in some of the flowers with cranberry and placed a gem on each center of the flowers. Used some white letter stickers for Prom and year. The last is just more of a collage of pics with stamping Graduated and small butterfly gem. paper was left over scraps from early pages. Yeah now I can work on my challenges I need to get done. 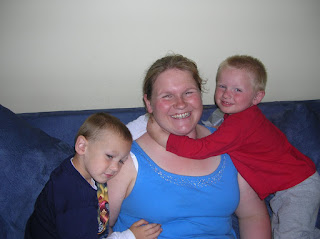 My brother was up this weekend so he snapped a few pics of me and the boys and gave them their kowala bears from Austrilia. They loved them. So we had a busy weekend and are ready for a nap or atleast I am!! Yesterday we had a cow that had to have a c-section to get the calf out. Poor Bossy, I just hope she gets better as she is weak and in bad shape. John said that is the only c-section they have ever had to do. (the vet did it after they couldn't get the calf out the other way. So needless to say it was a very long Sunday as John didn't get the day off and the boys were so over tired and crabby. Bri, Ashly, and Twan stopped by last night so city boy could milk a cow-- all I got to say is yup pure city boy!! I helped Bri ride a new calf (as we had two freshen yesterday), but she didn't really care for it. It was great to see them before they head over to Germany for 3 years. We are going to miss them. Bri is just a sweetie. Well off to Speech for Bud. I will post some cards later today or tomorrow.
Posted by InkyAndScrappy at 9:10 AM

Great scrapbook! I love that it is a smaller size. I really need to get working on my scrapbooking. I am soooo behind!

I love the cranberry color you used! 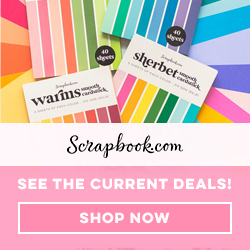 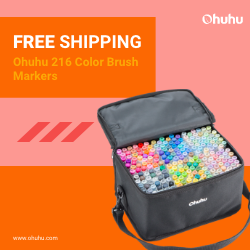